HISTORY OF THE MOILIILI JAPANESE CEMETERY

December 13, 2012
An article by Harriet H. Natsuyama of Moiliili

The Moiliili Japanese Cemetery has borne witness to the pioneering people who developed Moiliili Town and Honolulu from the early 1900s until the present. As I write this article in November 2012, with the financial support given by over one hundred donors, volunteers are building a new stone wall for the cemetery, including an entrance arch and garden spots of shade and rest for families who visit. At this time it seems appropriate to review how the cemetery began and how it grew over the intervening century. Information herein is based on a series of articles written by Oahu resident Jack Tasaka which appeared in Japanese in the East-West Journal in 2003. We are grateful to Ari Uchida from the Resource Center of the Japanese Cultural Center of Hawaii and to Hiram Ohta, a resident of Los Angeles, for the translations which they provided to the author of this article.

Creation of the Moiliili Japanese Cemetery

In the early 1900s, Moiliili was a swampy area with a small number of residences and businesses. This changed due to the four factors named above. The founding of the cemetery is attributed to a dream of Emyo Imamura, minister of the Hawaii Betsuin of Honpa Hongwanji in Honolulu. (Betsuin means regional headquarters.) He first established in 1906 the missionary institute which became the hongwanji temple now on University Avenue. Then Rev. Imamura turned his attention to building a cemetery for his parishioners. He recruited Rev. Tessho Kato and mission members Kametaro Morimoto and Katsuyoshi Maeda. With the assistance of contractor Kamioka, they identified a piece of property behind Kuhio School.

The original property had three acres and was acquired for $4,000. The funds came from Makiki Cemetery ($1,500) and from the Japanese Consulate Miki Saito ($2,500). A hole was dug on the land down to six feet to ascertain that there was no water underground that would interfere with a cemetery. The founders applied to the health department for a permit to construct a cemetery.

Just as the bochi (cemetery) was to open (around October 1908) the authorities informed them that this could not be a cemetery exclusive to the members of the Hongwanji congregation, but must be open to others. The name chosen to designate this was the Japanese Kyodo Bochi, Japanese Community Cemetery.

Mr. Morimoto sold his business and devoted himself to managing the cemetery as groundskeeper for 28 years.

By the 1930s, 1,800 people had been buried in the cemetery; after forty years the bochi was filled. In 1956 more land was acquired and the name changed to the Moiliili Shin-Bochi (New Cemetery).

The cemetery and the hongwanji both grew rapidly, and many people came to Moiliili by streetcar, bus, and car. They came for funerals and for ohaka-mairi especially on Memorial Day, and on the two obon days of July 15 (old calendar) and August 15 (new calendar). Soon there were many flower shops, ten on the mauka side of town alone. Cut flowers were supplied by Japanese growers in Manoa and Palolo valleys.

Troop 2 Boy Scouts cleaning the cemetery and placing flowers on gravesites, May 30, 1932. (Complete caption on p.238--Moiliili--The Life of a Community.)

Tasaka devotes considerable space in his newspaper article to the life of the caretaker Mr. Morimoto. Morimoto was born in 1855 in Hiroshima and in 1885 departed Yokohama on the second ship to Hawaii, the Yamashiro Maru. He had a labor contract with a farmer and when it ended came to Honolulu, around 1890. After working as a cook, he opened his own restaurant which he later sold in order to assume his caretaking role. He died in 1940. Tasaka wrote that because of people like Morimoto, the Moiliili Cemetery is forever kept beautiful.

We add here that, seventy years after Mr. Morimoto, the cemetery has fallen in some disrepair and our new project aims at renovation, restoration, and beautification.

A Mr. Katsunuma, in an article in around 1921-22, wrote about immigrants from Japan who took sick onboard ship, went into the hospital in Hawaii and died. Many are interred in the Moiliili cemetery, he said.

Although neither Katsunuma nor Tasaka gave dates, indeed one can find memorials to young adults who died in the 1910s.  A brief Internet search on "typhoid in Hawaii" conducted on November 28, 2012, came up with three immediate hits. Two hits concerned the November 1912 outbreak of typhoid fever in Kona (ncbi.nlm.nih.gov). Another said, "Explosive outbreak traced to water supply occurred at Schofield Barracks in fall of 1917."

Mr. Tasaka ends his article with the cemetery as a conclusion of the lives of the people interred here as well as the conclusion of an immigrant period of history.

My personal connection with the cemetery is through my grandfather, Sentaro Otsubo. Grandfather Otsubo was a skilled stone carver and had a monument business in Moiliili Town. He considered each gravestone a sacred monument to the memory of an individual, no matter how rich or humble that person. I regard the Moiliili Japanese Cemetery in the same light: A memorial to all those who are interred here and remembered by their loved ones.

In the last few years, Moiliili resident Laura Ruby and I have been documenting the monuments in the cemetery. We have a complete record of the monuments by photo and vital statistics. These data may be found at www.moiliili.net. There are 2,008 monuments and an estimated population of 10,000 souls. This cemetery is still visited by many on those dates mentioned herein, and on Mothers Day, Fathers Day, and on days of no special occasion except in remembrance.

The Moiliili Japanese Cemetery is an important part of the Moiliili community.

Indeed the Moiliili Japanese Cemetery is part of the life and history of Honolulu, Hawaii.

Let us keep it shining for future generations.

Note: this is the first in a series of articles. We will add more information as we acquire it and we will also publish some historical photos.

Boys with Mrs. Ogasawara (?) and 2-story home in the cemetery. In the distant background are the Shimabuku and Inamine homes (?).(Complete caption on p.232--Moiliili--The Life of a Community.) 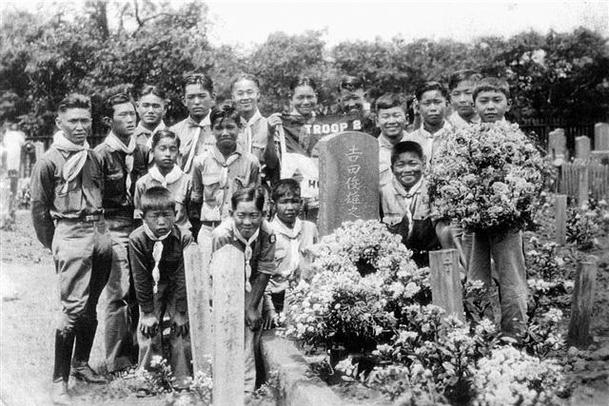 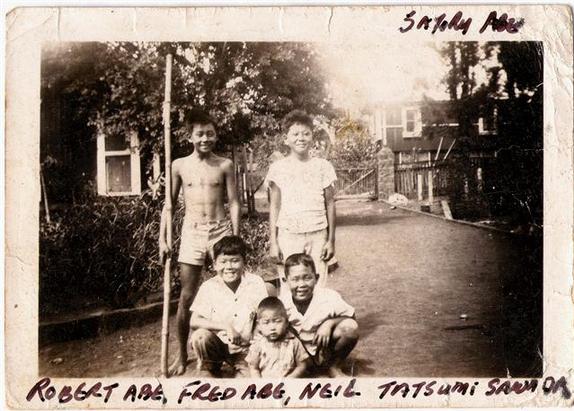 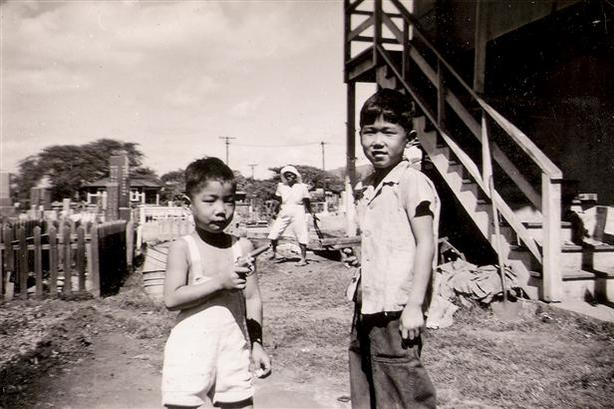